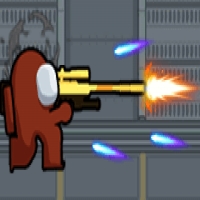 You’d have to be downright insane to take on an entire army. Nevertheless, that’s what this mysterious warrior from another galaxy is about to do in Impostor: Crazy Shooter. If he looks a little familiar, that’s because he was inspired by one of the famous intergalactic crew members featured in Among Us, the popular mobile game. Join this ferocious alien for an adventure that's a little more down to earth in this shooting game. Help him eliminate his enemies and purchase better weapons and armor between levels.